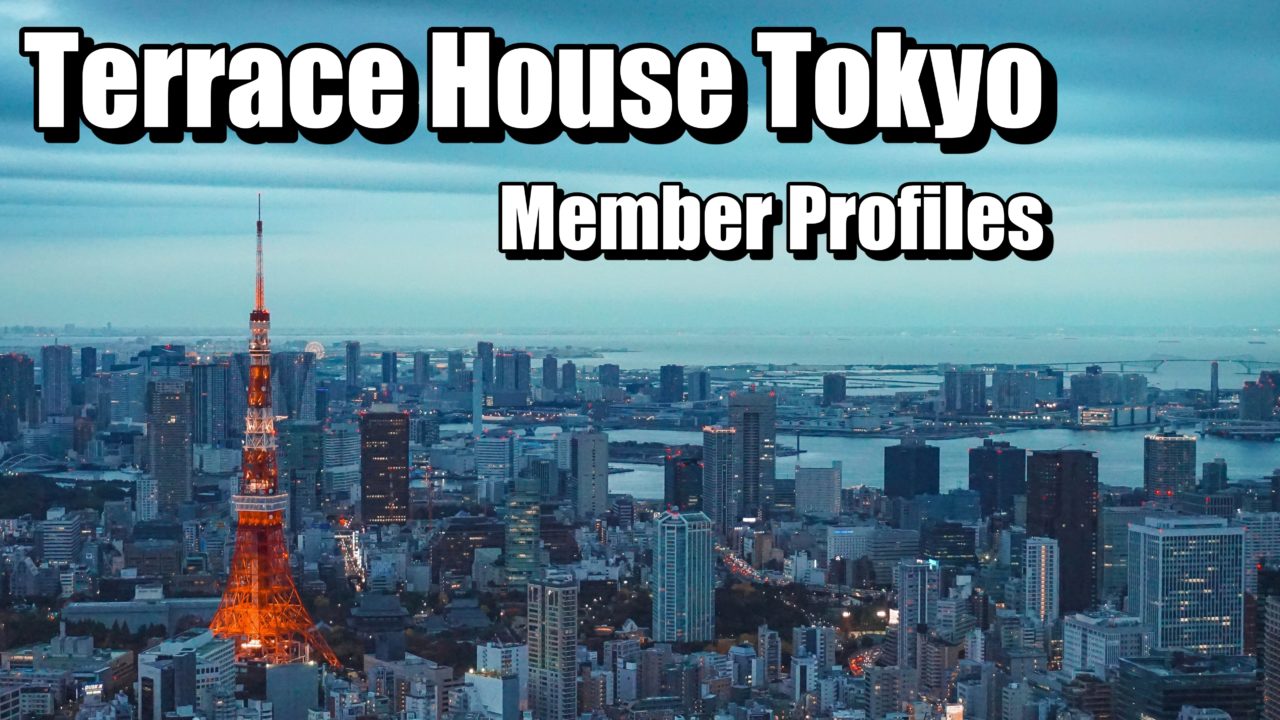 Terrace House 2019 Tokyo has been a huge deal since it was released on Netflix in May earlier this year.

We’ve seen many locations in past seasons of Terrace house, and now, thanks in part to the Tokyo Olympic games later next year, the Terrace House has returned to Tokyo.

Compared to the last season which took place in the beautiful mountainous town of Karuizawa, this new season in Japan’s capital city adds a more urban feel to the show. There are plenty of sightseeing spots and tasty restaurant ideas for people who might visit Tokyo.

And the show does well to set the city lifestyle vibe for this busy metropolis setting.Now let’s talk about the members of Terrace House Tokyo: Who is in, or will be coming for this season, and what’s their story?

Kaori Watanabe is an Illustrator who is from Tokyo. She graduated from Keio Gijyuku University, a very prestigious school with a notoriously difficult entrance exam.  You have to be very smart to get in!

She has a lot of language certifications such as TOEFL, TOIEC and is proficient in French. She is intelligent, and it shows.

She gives off a tomboyish image at first, but her elegance and boldness shows over time. Often times in the series, she demonstrates her independent values and strong opinions with the others.

She is now an independent Illustrator with her company, foxco. You can see her amazing work with foxco on her Instagram site.

Seika Taketomi is an actress and model known as Haruka.

With her beautiful appearance, it’s easy to tell that she’s a model.  She is an avid car enthusiast as well, and loves to race competitively with her Chevy Corvette.  As you can see on her Instagram profile, she also loves her dog, Kurutan.

She has mentioned how distanced she feels from other girls her age, explaining that she usually feels comfortable around more middle-aged guys.  This, along with some of her other opinions has unfortunately led to some harsh criticism on Instagram.  However, Seika continues to build a solid fan base and stay positive despite the critique.

Risako is a fitness trainer in Roppongi Quest as well as a professional Parkour runner.  She is the youngest, but you can see how disciplined she is by how well she takes care of herself and stays in such good shape.  She is a true athlete; capable of amazing parkour performance.

She has many fans that are attracted to her cute, cheery personality.

Shohei is an actor, and has worked in both Japan and Taiwan. He is trilingual, capable of speaking Japanese, Chinese, and English.

He does many other jobs too; not just acting.  His ideal goal is to be successful at whatever job he does, which seems to cause his focus to spread thin across his many interests.  This goal is often questioned by others, who wonder why he can’t just focus on one thing, mastering it before moving on to another interest.

In one episode of Terrace house, he was shown acting in a pink comedy, which is a kind of adult-themed movie.  This caused a ripple among his fans and other viewers of the show.

I’m looking forward to seeing how he will fall in love this season in Tokyo. 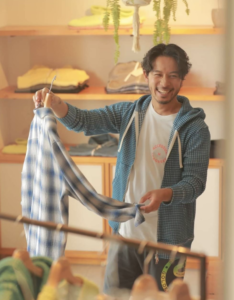 His real name is Kenji Yoshihara, Kenny is the stage name he uses for his band, SPiCYSOL.

He does lead vocals, guitar, and writes lyrics for the band, too.  Not only is he a great musician, but he also has impressive illustration ability that he enjoys as a hobby.  He especially likes drawing the female figure.

As of now, Kenji has already left the Terrace House.  Many people are desiring for him to return; perhaps in a future season.

Ruka is the cutest and youngest member of the Terrace house this season.  His cute smile and attitude attract a lot of fans.

He was the only applicant selected that was not part of a talent agency, as all other cast members selected are members of an agency.

He is the oldest of 5 other siblings.  He says that he is shy when talking to a woman, as his face turns red when he talks.  However, there is a rumor that he may actually be a playboy in his real life.  We will have to see how his story plays out.

He has been in Japan for 4 years, and his charming appearance attracts a lot of women.  He originally came from Italy with the dream of becoming a comic writer.

He was found in Shibuya by a model scout, and since then, he has been doing model work, as well as writing Manga.

It is easy to assume that this Italian must be a playboy, but he has expressed that he has only ever dated with one woman before.

He is very serious about relationships and is a very hard worker.  His Manga career has been a successes in japan, which is typically very difficult for a foreigner to accomplish.

She is a university student aiming to be a flight attendant.

Her last relationship was a year and half ago.  She has shown her preference for more mature men, as she has always had a relationship with men older than her.

She is only 21 years old, but her mature appearance is very elegant. I’m looking forward to seeing her in the upcoming episodes.

He is a basketball player for the Yokohama B-Corsairs.

He is the youngest of his siblings, and all of his family plays basketball.  He was even in California, playing in the Dominican University of California as a team captain.

Surprisingly, Hana is a pro wrestler belonging to Stardom.

People find it hard to believe that such a cute woman does pro wrestling.  What kind of relationship would such a girl have?  But her positive attitude and personality bring much joy to the Terrace House, so I’m sure she has a bright future.  I look forward to seeing more of her in the Terrace House.

Vivi is a Russian beauty who moved in to join the other members in the house on the 26th episode of Terrace House Tokyo.

First of all, her style, her face; Vivi exudes a remarkable beauty. She was born in Germany, and grew up in Russia. Will this classic Russian beauty crush the competition between the girls in Terrace House? Can’t wait to see what kind of impact she has on the other members; whether good or bad!

Vivi came to Japan and attended a university there after graduating high school. Her Japanese is really good. She speaks in a very fluent manner. Vivi has only been in Japan for 6 years, but attaining that level of fluency in only that amount of time is quite impressive. The reason she came to Japan is to learn about Fashion, and she figured Tokyo was one of the best places for that. While learning more about Japan’s fashion industry, she also started modeling. Eventually, she took an interest in acting as well, which captured her interest even more than fashion. So now, she does modeling and is also an actress in Japan. Every month she goes to Los Angeles to study acting to further her career.

Topus is an assistant of Lily Frankie who is a Japanese illustrator, writer, and actor. Currently Topus works for him, but previously worked as a jack-of-all-trades; balancing working as an illustrator as well as an actor. Topus was selected by Lily Frankie among several people and became his assistant. His polite personality and well behaved demeanor was the big reason that he was chosen for such a famous actor’s assistant.

Topus is originally from the Philippines, but came to Japan at the age of eight. He grew up in Japan and worked at a local factory in Aichi Prefecture until December 2018, when he became Lily Frankie’s assistant.

Kai Kobayashi is a half American and half Japanese who was born in Malaysia. He was living in Arizona, USA for a while, but traveled around Asia and ended up moving to Japan 3 years ago.

His last relationship ended about a half year ago.

It was stand-up comedy of all things that saved him from reaching rock bottom with a broken heart. Since then, he has set his goal to become a stand-up comedian. His main inspiration is Chris Rock.

Terrace House gives us insight to human relationships, connecting the audience to all the drama, emotion, romance, and fun of each Terrace House member.  The program brilliantly demonstrates these qualities without a script, which keeps fans coming for more season after season.

The Karuizawa edition was quite turbulent, but I am looking forward to seeing where the season leads in Tokyo now!  This article will be updated as more information is added, so please continue to check it out! 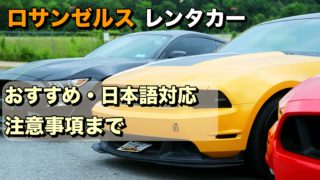